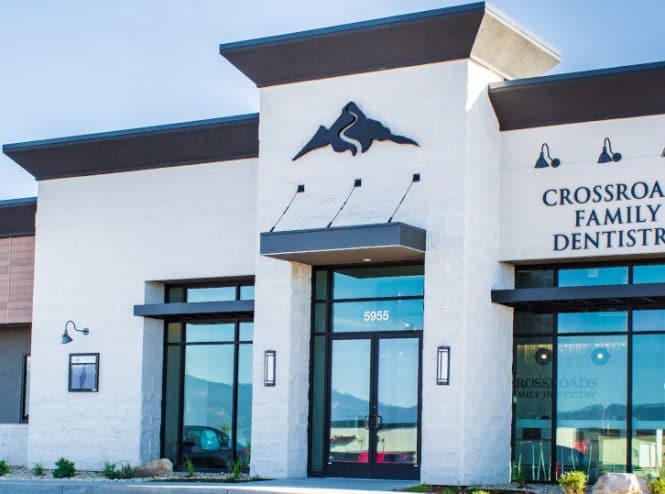 As the number one cause of tooth loss in adults, periodontal disease is commonly known as “gum disease”. 30% of the population predominantly those in their 30’s-40’s experience this condition, that can lead to boneless and ultimately tooth loss in extreme cases. Periodontal disease is not curable, but it is manageable and there are precautions one can take to keep their oral health at its best.

If you have been diagnosed with gum disease or have a gummy smile, you may be a good candidate for one of our laser dentistry procedures. Crossroads Family Dentistry has extensive experience using laser technology to treat a number of oral health issues. We can improve your periodontal health and enhance the appearance of your smile with innovative laser procedures.

Periodontal disease is the result of extensive plaque, but other variables can accelerate its progression. Our mouths home millions of bacteria, both beneficial and harmful. Bacteria form a sticky substance known as plaque and sticks to the teeth. Brushing and flossing aim to remove plaque before it mineralizes into tartar. When tartar becomes a colony for more bacteria, it adds to their population and produces toxins into the gums. Gums react to this bacterial invasion with an inflammatory response as a reaction to the immune system. Around the base of each tooth, a small collar of gum tissue exists that forms a small warm and dark crevice or pocket, providing the perfect habitat for deeper tartar and bacterial penetration seeping into the base of the collar. Early inflammation results in bleeding gums, known as gingivitis. When bacteria is left untreated, it creates a chronic infection in the gum collar and the bone begins to deteriorate around the teeth as the bacteria burrow deeper into the gums. While gums may be slightly tender at this stage, there’s generally minimal discomfort as the bone dissolves. More than 50% of the bone around your teeth can disappear before experiencing signs of loosened teeth or pain. The bone around teeth cannot regenerate and this bone loss becomes permanent and more difficult to manage.

Once we establish a diagnosis defining the severity of gum disease, a personalized treatment plan will be developed with you. In less extreme cases with little or no bone loss, one or two visits with our hygiene team may bring the condition under control by using laser therapy. When you leave our office with a strategy for daily home care and establish a schedule for maintenance, little additional treatment may be needed. If the inflammation has advanced with extensive bone loss, we will suggest the start of laser periodontal therapy over several visits.

If the bone and gums have been destroyed because of periodontal disease, we can pass the laser over hard and soft tissues to prompt the regeneration process. This procedure is ideal for patients with receding gums or a significant level of bone loss.

Patients diagnosed with periodontal disease do not have to undergo painful surgery or wait weeks to see results. With laser gum surgery, we can treat infected tissues in a single visit and do not need to cut away tissue. Crossroads Family Dentistry simply passes the laser device over the tissue to kill bacteria and the gums heal rapidly on their own. Laser treatments reduce periodontal pocket depth, which improves the health of your gums in a very short period of time.

Your licensed dental hygienist will use a dental laser to access and remove the inflamed gum tissue from around the root of the tooth. When the infected tissue is removed and the root is exposed, the root scaling begins. This involves scraping off the tartar and plaque buildup below the gumline and around the root. The hygienist then smooths the root with instruments to remove any rough spots that might attract bacteria and cause future infections. The area between the gum and the root can then regenerate during the healing process.

Are you self-conscious about having a gummy smile? We use an innovative laser dentistry technique to reshape the gum line and can also reposition the lips to create a beautiful smile. This procedure is less invasive than traditional surgery, which means you can enjoy results with minimal pain and discomfort.

A gingivectomy is a surgical procedure that can be performed with a laser to minimize bleeding and trigger the natural healing response. After the dental laser procedures, infected gums and excess tissue will have been removed. We can also use the laser to reshape the gums and improve your smile after gum disease.

Crossroads Family Dentistry is among the few dentists in the area to use a diode laser to manage pain during treatment. Certain wavelengths of the laser have proven to be very effective for treating TMD and joint-related pain.